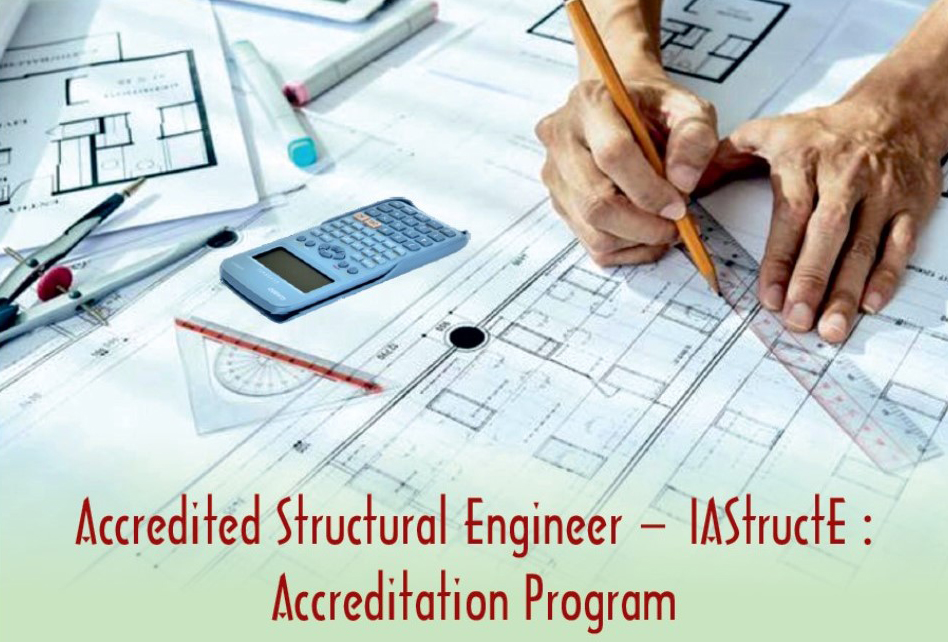 The IAStructE program for Accreditation as Chartered Structural Engineers (CSE – IAStructE) is suitable for practicing structural engineers who have experience in the structural design field and have a good understanding of applicable design codes/standards in India.

This accreditation will help Structural Engineers in India to set a benchmark of proven professional & technical excellence and raise the levels of structural engineering practice in the Country.
The entire program would be on the basis of a two-stage process consisting of an interview for the assessment of Initial Professional Development (IPD) followed by a written examination based on actual problem-solving. Applicants have to demonstrate their competence in the designated 13 core objectives on which they will be assessed during the interview. The applicant would then require to clear the examination by answering any single chosen question from the options given in the question paper with a minimum level of marks stipulated. Both stages are mandatory to clear the assessment process and thus to get recognition.

A Chartered Structural Engineer – IAStructE is someone who wishes to:

The complete information about the entire process along with the application form and annexures can also be obtained from a booklet, which can be downloaded from the following link: Booklet CSE IAStructE Accreditation Program

This assessment process will be held bi-annually, being initiated in January & July respectively.

Eligibility for appearing at the interview & examination:

The Minimum qualification for the candidate shall be a Bachelor’s degree in Civil Engineering recognized by All India Council for Technical Education (AICTE) with a minimum of 5 years of relevant professional experience in Structural Engineering.

Candidate will be required to pay fees in two stages, as stated below :

The candidate shall pay Rs 2,500 + GST for each subsequent attempt, either for Interview or for Examination.
All the payments shall be remitted online as per bank details given below OR by Cheque/DD drawn in favour of “Indian Association of Structural Engineers”.

List of subject areas for possible inclusion in the Examination paper:

Interview: Applicants have to demonstrate their competence in the designated 13 core objectives, on which they will be assessed during the interview. It should be submitted along with the application form as per the prescribed format of IPD report form

Examination: The examination paper will have few questions from a set of subject areas (Examination Coverage). Applicant will have to attempt only one question (which will have two distinct sections), in a fixed time (07 hours excluding 30 minutes of lunch break). This will be an open-book examination in physical mode.

*If not found to have attained the expected level, candidate will be informed and there will be a cooling off period of one year before the candidate can re-apply. During this one year period the candidate should update the initial professional development (IPD).

**If the candidate does not clear the interview, there will be a cooling off period of six months before he/she can re-appear. During this period the candidate should update the IPD.

a) Candidate should demonstrate their competence in core objectives (Refer Annexure 1) through the Initial Professional Development* (IPD) as covered in Annexure 2, on which they will be assessed during the interview and examination.

There are two routes for demonstrating achievement of IPD (refer Item 2.0 of Annexure 2 for more details) :

b) Candidate should clear the examination with a minimum of 60% in the overall score and a minimum of 40% in each of the two sections of the chosen question.

*Initial Professional Development is a collection of the work that the candidates has been involved in and can provide sufficient documentary evidence to demonstrate their competence.

Please click here to get Annexure 2 (Guidelines for IPD portfolio)

VENUE FOR INTERVIEW AND EXAMINATION

The professional interview tests your ability and ensures that you have satisfied all the core objectives within your Initial Professional Development (IPD). The interview normally lasts between 60 and 90 minutes. This includes around 10 minutes for you to make a presentation that explains how you have met your IPD objectives. The Interview generally will be held off-line. IAStructE secretariat will contact you to advise you of the venue for Interview. In exceptional circumstances, interview may be held in online mode (in MS Team or Zoom Platform).

Written Examination shall be held in offline mode, in-person, at the centres located in metro cities (Delhi, Mumbai, Kolkata, Chennai) to be notified at appropriate time before examination, depending upon the number of candidates and availability of resources. The Examination is going to last for about 7 hours.

*Please note that this certification is currently only available in English.